This page is an overview of the user interface (UI) in Universe Sandbox. It is meant to describe the general purposes of different parts of the UI and help in finding different settings and controls.

The UI in Universe Sandbox changes often with updates, so not everything may be exactly as it appears in the latest version. 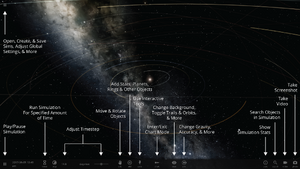 This is the first step in building a simulation from scratch. See Getting Started for more information.

Save the current simulation as a custom simulation, or share on Steam Workshop. Saved simulations can be found in Home > Open > My Sims.

Adjust general game settings, like Graphics settings, Audio settings, and Performance Settings. These settings are global and will persist when a new simulation is loaded. For simulation-specific settings, see View Settings and Sim Settings below.

Browse simulations created by other users on the Steam Workshop.

Pause a running simulation or a play a paused simulation. This can also be controlled with the Spacebar on a keyboard.

This displays the current date and time in the simulation. When clicked, it opens the Time Zone setting.

The Step menu contains additional time step settings and controls, including the Target Time Step, and the Advance One Time Step, Reload Simulation, and Pause on Collide controls.

Displays the simulation Time Step, which can be adjusted using the slider or by entering a value in the text box with the keyboard.

Allows the user to adjust the position, rotation, and velocity of a selected object or objects.

Adds a new object to the simulation.

Provides access to several tools for manipulating the simulation:

Rearranges the objects in the simulation to be ordered according to size or mass.

These settings affect only the currently opened simulation.

These settings affect only the currently opened simulation.

Objects are sorted into tabs according to their object types, including Stars, Planets, Moons, Minor, Misc, Galaxies, and Black Holes. There is a text box for searching all simulation objects by name.

Tools and settings for capturing video.

Tools and settings for taking screenshots.

Right-clicking an object in the simulation will open the object's properties panel, which will include one or more tabs displaying properties specific to that object. These tabs can include: